With Halloween just around the corner I thought it would be fun to share some interesting facts about bats and help put many myths and untruths about bats to rest. For instance, Bats are not blind. They have the same senses we do, sense of smell, hearing, taste, sight and touch. Bats will not attack you and if you see them flying low they are only looking for insects. There are no Vampire bats in the United States but they are found in southern Mexico, Central and South America. Vampire bats do not suck blood like you see in the movies, they make a scrape with their sharp teeth then lap it up. I know, still pretty gross, but interesting. The most common misconception is that you will contract rabies from bats. Studies have shown that less than one percent of bats contract rabies and when they do they usually die within three or four days. However, you should never handle a wild bat with your bare hands. If you find one on the ground they may bite in self defense.

Here are a few interesting facts about these amazing creatures. Although some mammals can glide, bats are the only mammal that can fly. Bats are classified into a unique group called “Chiroptera”, which means “hand wing” in Latin. Bats literally use their hands to fly. Their wings are like our hands, but with longer fingers and a thin, tough skin between the fingers. 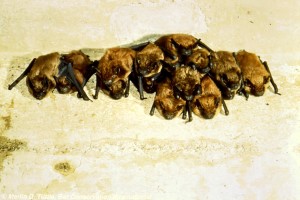 Bats can fly extremely fast and at high altitudes. Some species have been detected flying over 50 miles per hour. Other species have been detected flying over 3,000 feet above ground in search of insect prey. Bats are a very important part of our natural ecosystem. They help control pests, are essential pollinators and disperse seeds for numerous plants. 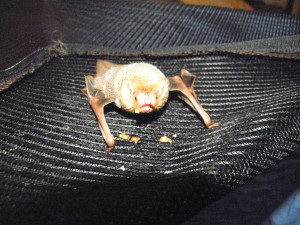 Insectivore bats like those in Florida are predators of night-flying insects, like gnats & mosquitoes and many of the most damaging agricultural pests. More than two-thirds of bat species eat insects, and they have healthy appetites. A single little brown bat can eat up to 1,000 insects in one hour; most single bats will eat between 2000 – 6000 bugs a night. A good reason to consider installing a bat house if you have a pond or lake in your yard. Insect-eating bats in the United States provide pest control service for the U.S. agricultural industry saving them billions of dollars a year.

On average, mother bats rear only one young per year, and some do not give birth until they are two or more years old. Bats live very long lives, there is a record of a bat that survived in the wild for 41 years, and many species live 15 to 20 years or more.

If you build it they will come! I can tell you first hand this is true. Dave put up a bat house near our natural pond and within a few weeks the house was full. We could see them swooping into the house at sunrise and leaving to go find dinner at sunset. Your bat house can be either single or multi-chambered, both work well when installed on buildings, trees or on poles. A general rule of thumb is to mount your bat house at least 10 feet above ground, but 12 to 20 feet is best. Be sure to choose a sunny location on the East or South facing side of your house and away from . Bat houses work best with at least 6-8 hours of direct sunlight but do not do well when lit by bright lights. Remember do not install your bat house above doors or windows where guano will fall or accumulate in front of your door.

Bat House Tip: Bats may find bat houses more quickly if they are located along forest or water edges where bats tend to fly. However, they should be placed at least 20 to 25 feet from the nearest tree branches, wires or other potential perches for flying predators. It is also best to mount before spring.