Check out our latest school project! Building Bridges With Schools and Community

The project was created through a national grant from the John F. Kennedy Center for the Performing Arts in Washington, DC. Sarasota was selected to be one of 7 cities nationwide to participate in MetLife’s grant. We are honored to be working through the Van Wezel Performing Arts Center along side local artisan Brenda Smoak. We involved students at Oak  Park and Lakeview Elementary Schools in building a waterfall on each campus, painting an existing bridge that the students use daily to traverse a ravine, and creating a meditative garden space at Oak Park. The goal of the MetLife grant is to involve students who are disabled with students who are not in a joint art project to build community. Brenda’s project was chosen because it meets these community-building goals as well as teaching math and science skills in the process. Over 300 students will attend two performances at the Van Wezel during this residency. 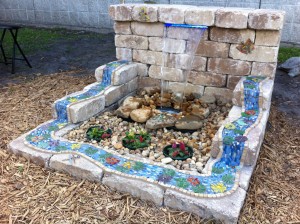 Over the next couple of weeks the students with the guidance of their horticulture teacher, Kurt Boesenberg, will enhance the area around the pond-free water feature with landscaping plants that were grown in the school’s greenhouse. Students will be planting native species to attract butterflies as well as incorporating sensory garden plants for those students on the autism spectrum. The students at Oak Park will also create mosaic cement benches to be placed in their sensory/meditation garden. 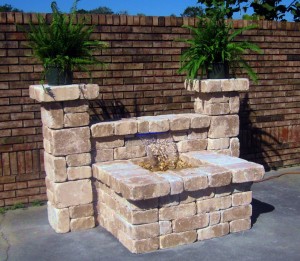 Next week the students will be finishing the bridge painting and adding the Mosaic accent pieces to the bridge.

We want to thank the teachers, and I apologize if I leave anyone out,  Robyn Sadlo, Karen Johns, Patrice Kennedy, Kurt Boesenberg, Sandy Sontag & Laurie Rittmeyer as well as Principals Joan Bower & Ronald Dipillo for their help with the project too!