Garden Like an Egyptian, the History of Water Gardens

Most people, when looking for inspiration for their water garden, think of Koi and Japanese Gardens. You may be surprised to find that the Japanese were not the first culture to keep water in their garden. In fact there are many very diverse cultures that influence today’s water gardens. 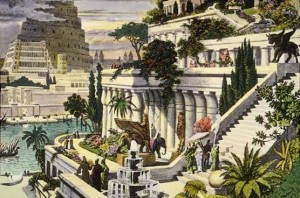 Diving into the history of water gardens, the earliest depiction of a planned water garden actually dates back around 4000 years with the Egyptians. Ancient records show hieroglyphics and paintings of formal water gardens, rectangular in shape, filled with fish, ducks and lotus, surrounded by fruit trees and ornamental plants. The Lotus was believed to be a symbol of the sun, to them, it represented creation and rebirth because it would close at night and re-open in the day.

One of the seven wonders of the ancient world is the Hanging Gardens of Babylon created by Nebuchadnezzar II for his wife. These formal Persian walled gardens with their pools and irrigation canals symbolized paradise in an otherwise hot and arid climate. There were rooftop gardens, terrace gardens and fountains to cool the area. Water was brought to the top of the artificial mountain from the river below with a system of buckets, pulleys and pumps and men to power the system. 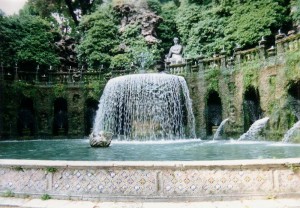 In the hills of northern Italy is the Villa d’ Este palace. This 16th Century garden is dedicated to water features of all sizes. The organ fountain features a working organ with the organ’s pipes hidden under the water playing music. Everything there is turned into a water feature from cement statues to stairs with rivulets. Another 16th Century garden is the Villa Medici which is very similar to the Babylon gardens. Unlike the Persian gardens, the Italian garden is on a hillside making it much easier for the water to flow over the waterfalls. Many Roman gardens where built in conjunction with the public baths giving them a serene spot to meditate.

Moorish gardens from the 13th to the 16th century in Spain were primarily created with water, fruit trees and shade. The pools with ornate tiles and spouting fountains would be the center piece of the courtyard garden surrounded by shade trees and colorful plantings.

For 2500 years classic Chinese gardens have contained one or more ponds along with pavilions, bridges and bright colored flowers. These peaceful gardens are usually surrounded by white walls with a fancy gate or doorway. The Chinese use four elements in their gardens, water, plants, rocks and architecture, they believe that the garden symbolizes a living organism with the rocks being the bones, the water is the blood and the plants are the dressing. Chinese gardens are meant to bring balance, soothe the spirit and be spiritually uplifting. 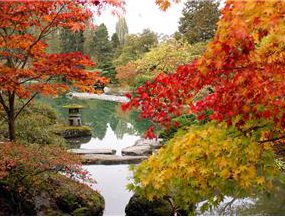 Japanese gardens may be famous for their beautiful graceful Koi ponds but they draw inspiration from the Chinese gardens. A Japanese garden is a reflection of a larger natural landscape. Although water is a very important element in Japanese garden along with manicured shrubs, stone and moss it does not necessarily have to be literal, as in a Koi pond, stream and small basin. Water can be simply represented by a dry stream or raked bed of pebbles surrounding a large boulder.

With varying tastes and styles, modern American gardens use elements of historic gardens from all over the world.

“Of all the elements, the Sage should take water as his preceptor. Water is yielding but all-conquering. Water extinguishes Fire or, finding itself likely to be defeated, escapes as steam and reforms. Water washes away soft Earth or, when confronted by rocks, seeks a way around. . . It saturates the atmosphere so that Wind dies. Water gives way to obstacles with deceptive humility, for no power can prevent it following its destined course to the sea. Water conquers by yielding; it never attacks but always wins the last battle.” (John Blofeld’s The Wheel of Life)