Choosing only three Koi varieties for the last in our series on Koi proved to be a bit difficult. After all, there are hundreds to choose from. Here are three classes that include many sub varieties.

Koromo
Koromo, which means “robed” in Japanese, is a group of fish that originated in the early 1950s from a cross breeding of male Kohaku and female Asagi. A good Koromo starts with the same basics as the Kohaku with snow-white skin and deep red hi. It is important that the black color does not bleed into the white areas.

The Koromo class is made up of several varieties including the Sumi Goromo, Budo Goromo, Budo Sanke, Koromo Sanke, Koromo Showa, Doitsu Ai Goromo and Goshiki. The Goshiki is one of the most diverse in the group. Goshiki are said to be a five color Koi with red, black, white, light blue & dark blue. It is sometimes difficult to pick out all five colors, especially when the blue and black overlap forming purple tones. To add to the confusion a Gin-Rin Goshiki, with their reflective scales mirroring the skin color beneath, may appear gold, silver or blue/gray in color.

Kawarimono
This class of koi includes non-metallic that are not included in other varieties. Many are original varieties while others are cross bred. They are grouped into sub-classes of single-colored Koi, black koi of Karasu decent, and others. 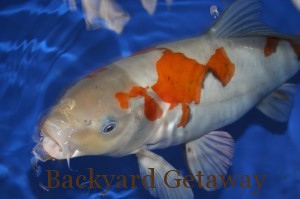 The Single color Koi include; Benigoi an orange koi that looks like giant goldfish; Kigoi a lemon yellow variety; Magoi which appears black but is actually a deep bronze and the friendly tea colored Chagoi.

Karasu, Suminagashi, Kumonryu and Matsukawabake make up the black koi class of Kawarimono. The black in all four varieties is very deep and even. The Karasu or “crow” is an interesting, older variety with matt black fins and body with an orange or white under belly. The most popular black variety is the Kumonryu, or dragon fish. They got their names from the mythical dragons in Oriental paintings. Suminagashi have black scales that appear to have white edges. Matsukawabake pattern and color can from one season to the next with some becoming all white or all black.

Listed in the sub-class of “other” the Ochiba Shigure is fast becoming very popular. Ochiba Shigure, which means “leaves on water”, is a Chagoi variety with tea colored patterns on a gray body. A good fish will have darker brown/red patches that are separate from the gray body color. This friendly fish grows quickly and is a good school leader.

Lastly, is a class of single colored koi with an all over metallic luster. The Hikarimuji, “shining” classification includes Ogon and metallic Matsuba. The first true Ogon originated in 1946 after 25 years and four or five generations of cross breeding. New pond owners are drawn to Ogon because they grow quite large and are easy to see in the pond. Ogon can be white, yellow or orange in color. Like many other classes there are several varieties of Ogon including: Kin Gin-Rin Ogon, Doitsu Ogon and Matsuba Ogon. The Ogon has played an important role in development of other metallic koi varieties. 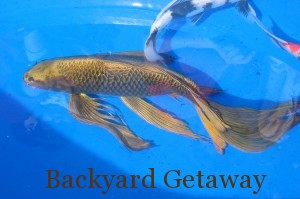 The colors and patterns on koi may change and continue to develop until they are at least three years old. Although there is only one species of Koi, Cyprinus carpio, there is no shortage of choices of Koi varieties and classes. When purchasing Koi for your pond remember, recognizing a healthy, well-shaped Koi, free of disease and parasites is more important than knowing the names of all the varieties.