Size Matters…When it Comes to Your Pond Plumbing 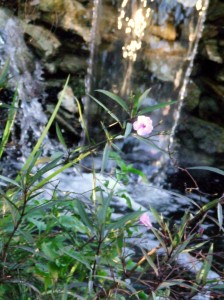 When it comes to pond pumps most men will agree bigger is better. More flow, more noise, more power! The size of your pump should not be the only thing you consider when creating a waterfall. A couple of weeks ago I was talking with a customer, Jack, about his pond. He was frustrated with the flow he was getting from his pump. It seemed, that a neighbor of his had a similar size pond & waterfall with the same exact pump, but the neighbor was getting at least double the flow. Jack had built the pond himself a couple years ago. He had carefully researched information on filtering a pond and the proper pump size. 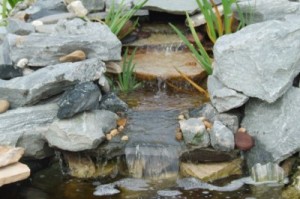 Before we discuss why the neighbor has better flow let me tell you about Jack’s pond. The pond is approximately 1200 gallons with a waterfall 18″ high by 12″ wide. Because he was planning to keep Koi, he knew he should have a pump that recirculates the water at least one to two times per hour. Jack also knew that it takes roughly 36 gallons per minute to create a waterfall 1′ wide x 1″ deep. With this information and taking into consideration the head height from the top of the water surface to the outlet on the waterfall, Jack installed a 2400gph pump. The pump plumbed from inside the skimmer to the waterfall didn‘t seem to be working to it‘s full potential. Now, the neighbor’s pond is almost identical in size right down to the waterfall and as I mentioned before he has the same size pump. After asking a few questions, we finally came to the root of the problem. Jack used 1″ PVC piping to install his pump to the waterfall while the neighbor used 1 1/2″ PVC piping. This may seem like a small difference but you see when it comes to piping, size really does matter!

Jack had assumed that since the pump he was using had a 1” outlet then he should also use 1” piping. The truth is he should have sized his plumbing for the volume of water pulled through his pump, not to the outlet size of the pump. A 1” PVC pipe will only allow 25 gpm while a 1.5” PVC will have a maximum flow of 60 gpm. In other words, even though his pump rating is 40 gpm the most flow he would get out of the 1” pipe would be 25 gpm. As you can see that is a big difference. Not only do you lose flow when using a too small pipe your pump will have to work harder due to the friction loss. There are charts, graphs and technical terms that I could include to explain the mathematics behind this; instead, I would like to share an interesting analogy written by Rick Bartel of Atlantic Water Gardens. Rick asks if you view water as if it were traffic, which size of “road” should you install in your water feature project to move the most traffic (water) with the least congestion? The answer: a larger road (pipe) will move more traffic (water) through your water feature system with less effort. 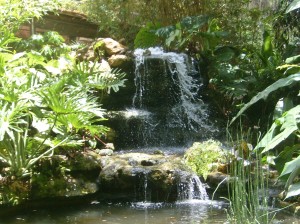 Another point Mr. Bartel makes is that every time you install a valve or fitting, you are adding a construction zone to your road system, thereby slowing your traffic (water) flow. We can all relate to this when we try to get through a construction zone during rush hour. As you can see, it is not only important to use the proper size pipe it is also important to use the least amount of fittings possible. Yes, the men were right, bigger is better, not only when it comes to pump size but also pond plumbing.