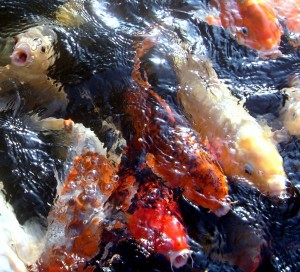 There is nothing more peaceful than watching beautiful Koi, the living jewels of the pond, gracefully swimming through the water. It is hard to believe that the Koi of today all started hundreds of years ago in Japan from the common black carp (Cyprinus carpio). Through years of breeding, there are now hundreds of classes, varieties & sub-varieties of Koi. Japanese breeders continue to introduce new varieties every year, with more interesting color and patterns. For the beginner and even for seasoned Koi keepers, it can be overwhelming trying to learn and remember all the varieties. The most popular and the most readily available varieties include the Kohaku, Sanke & Showa, which comprise the Go-Sanke or ” the big three”. 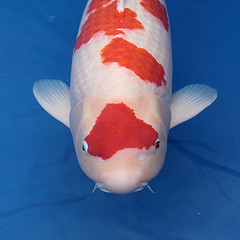 The simple red & white carp first appeared in the early 1800’s in schools of common carp that were bred for food. Because they were different than the bland black carp the farmers kept them back as pets. It was not until the late 1800’s that the Kohaku pattern was truly developed. A good Kohaku is snow white with even hi (red) markings that are more brownish-red than purple. You do not want to see yellowing in the white areas and the caudal fin (tail fin) should be pure white as well. The hi pattern can include one to four distinctive red steps. A Kohaku with a single circular hi on the head and no other hi on the body is considered a Tancho. You can also find Doitsu, Gin-Rin and metallic Kohaku. 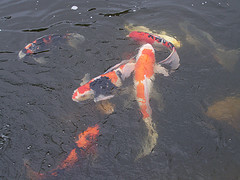 The only other Koi variety with traceable bloodlines besides the Kohaku is the Sanke, which dates back to 1914. Sanke are predominately white with both red and black markings. Sanke are in essence a Kohaku with sumi (black) markings. The sumi will be above the lateral line, but not on the face or belly of the Koi and can take years to be “finished”. In some, the sumi may not appear until the age of two. Kuchibeni variety of Sanke is when hi is on the lips giving the appearance of lipstick. The pectoral fins of a Sanke will be clear or black striped, never with a block of sumi. Like the Kohaku, there are many varieties & sub-classes within the Sanke class. 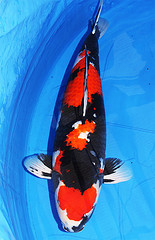 The last of the big three is also the youngest, developed in 1927 with yellowish hi and not very distinctive sumi. The Showa of today has deep red hi; snow-white skin & jet black Sumi. So the question is how do we tell the Showa from the Sanke, which is also red, black and white? Showa may have a thick patterned sumi wrapped around its belly while the Sanke has a white belly. Showa may have blocks of sumi on its fins and face, the Sanke will not have either trait. Traditionally, the Showa will have very little white with equal patterns of red and black. Their pattern can continue to change for years making it a very interesting Koi to keep.

Although it is interesting to learn about the many varieties, knowing every little aspect of the Koi classes and varieties is only important if you are planning to show your Koi for judging. For most Koi keepers it comes down to finding Koi that appeal to you and compliments your pond.